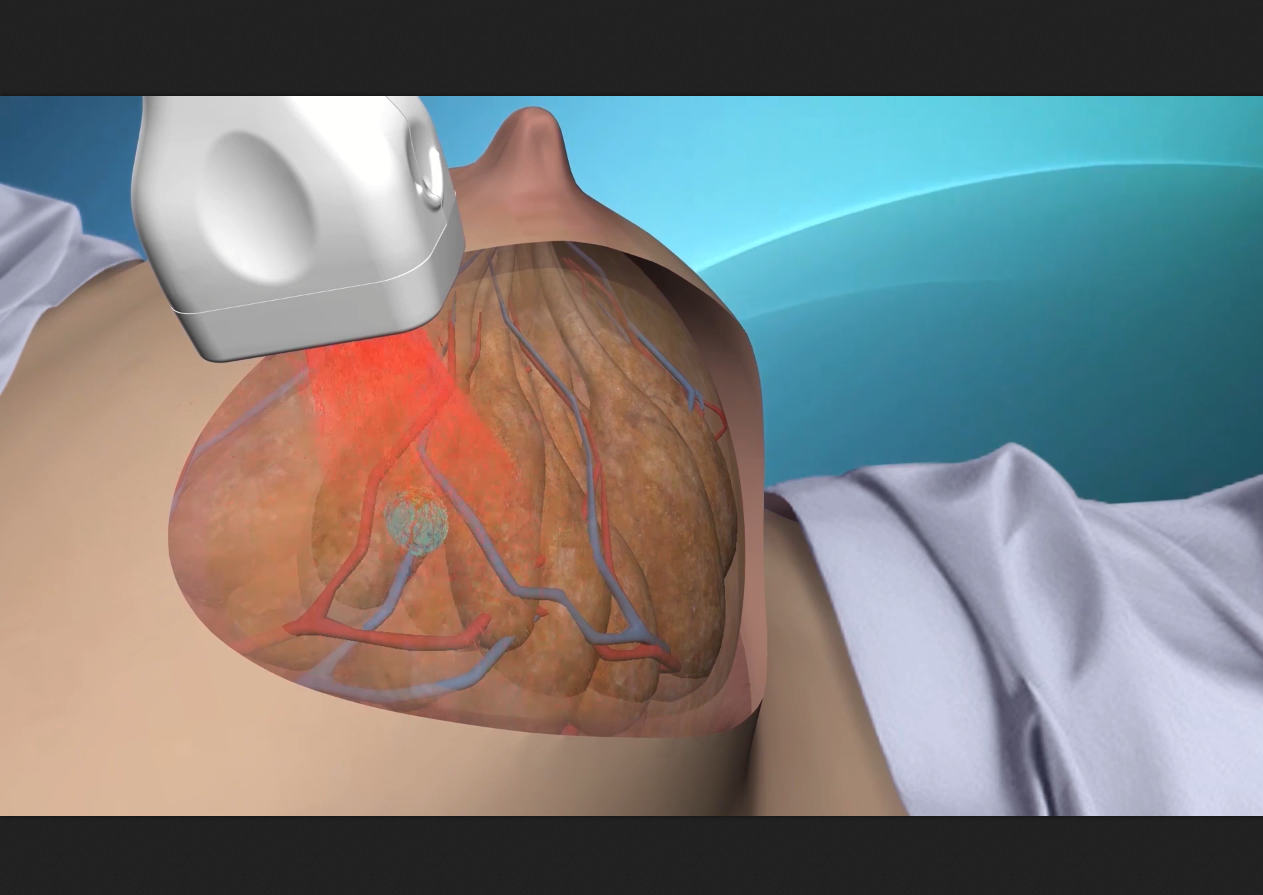 Seno Medical developed a new breast diagnostic imaging system called the Imagio™ and needed a powerful way to promote its advantages over traditional ultrasound systems for a quickly approaching trade show. The video would highlight the Imagio system’s ability to combine the morphologic imaging inherent with ultrasound with the functional imaging its unique opto-acoustic imaging offers. The basic function of the opto-acoustic technology needed to be vividly portrayed in 3D animation to inspire confidence in the advantages the Imagio system bestows on the diagnostic process. Finally, the video needed to be finalized in an ambitious approximately seven week timeline.

The project began with the client sending extensive video training materials for MVP’s review. The Imagio device features a 6-up display to show the various morphologic and functional images produced by the Imagio’s hybrid opto-acoustic technology. MVP decided to use this 6-up display as a visual motif to communicate the features and benefits of the breast imaging system. MVP began by producing a textual storyboard outlining the on-screen texts and images to be used, scene by scene. Visuals were added to the storyboard to nail down the concept. MVP then worked on developing the animation, including integration of 3D female anatomical model with the Imagio transducer to realistically portray the opto-acoustic technology in an engaging and elucidating manner.

The video begins with the introduction of the Seno Medical brand with its logo against a gentle wavy blue animated backdrop. Light, shadow, and transparency special effects along with special animated transitions add dimension and help capture and keep attention—which is critical when promoting new medical technology in trade shows, where there is always fierce competition for viewers’ attention. The video implores viewers to use the new system to “Image Confidently,” appealing to clinicians’ desire to continually enhance the sophistication of their practice. The Imagio’s unique ability to transmit information about the relative blood flows and oxygenation of said blood flows around a tumor to distinguish between benign and malignant lesions is emphasized. This added diagnostic capacity means that many biopsies that would ultimately reveal negative results are avoided, simplifying the clinical process, eliminating costs for biopsies, and increasing patient comfort.

The video then shows the Imagio transducer on a female anatomical model going through the opto-acoustic process. The diffuse infrared laser is portrayed as light particle shows in two colors to emphasize the different wavelengths used to pick up different functional images, with colors coded to the outputs shown on the 6-up display. After each laser emission, the tumor bounces back soundwaves, demonstrating the essential function of the breast imaging system in which the heated tumor’s expansion results in a detectable sound emission. The sound waves are a special clear translucent effect that visually simulate the vibration of the 3D anatomical tissues through which they travel.

The video progresses by introducing the six screens which make up the imaging system’s 6-up display. Each screen is first shown with an explanation of the information it portrays. The screens then populate the display of the Imagio device to the side. A list of six key features of the device animates into screen. Then, each screen of the 6-up display is replaced by a image. One by one the images come forward with benefit statements distinguishing the advantages of the opto-acoustic imaging provided by the Imagio system. The video concludes with a reinforcement of the major advantages the system offers: reduced anxiety for patients, and greater confidence for clinicians. The Imagio brand is then reinforced with the tagline: “Smarter, Gentler, Confident Imaging.”

The final video clearly and succinctly communicates the value offered by the Seno Medical Imagio opto-acoustic breast imaging system. Powerful visuals, including animated transitions, special effects, and most importantly anatomically correct 3D medical animations ensure that the video will be effective in attracting eyes and keeping hold of attention, even in the highly competitive atmosphere of a trade show.