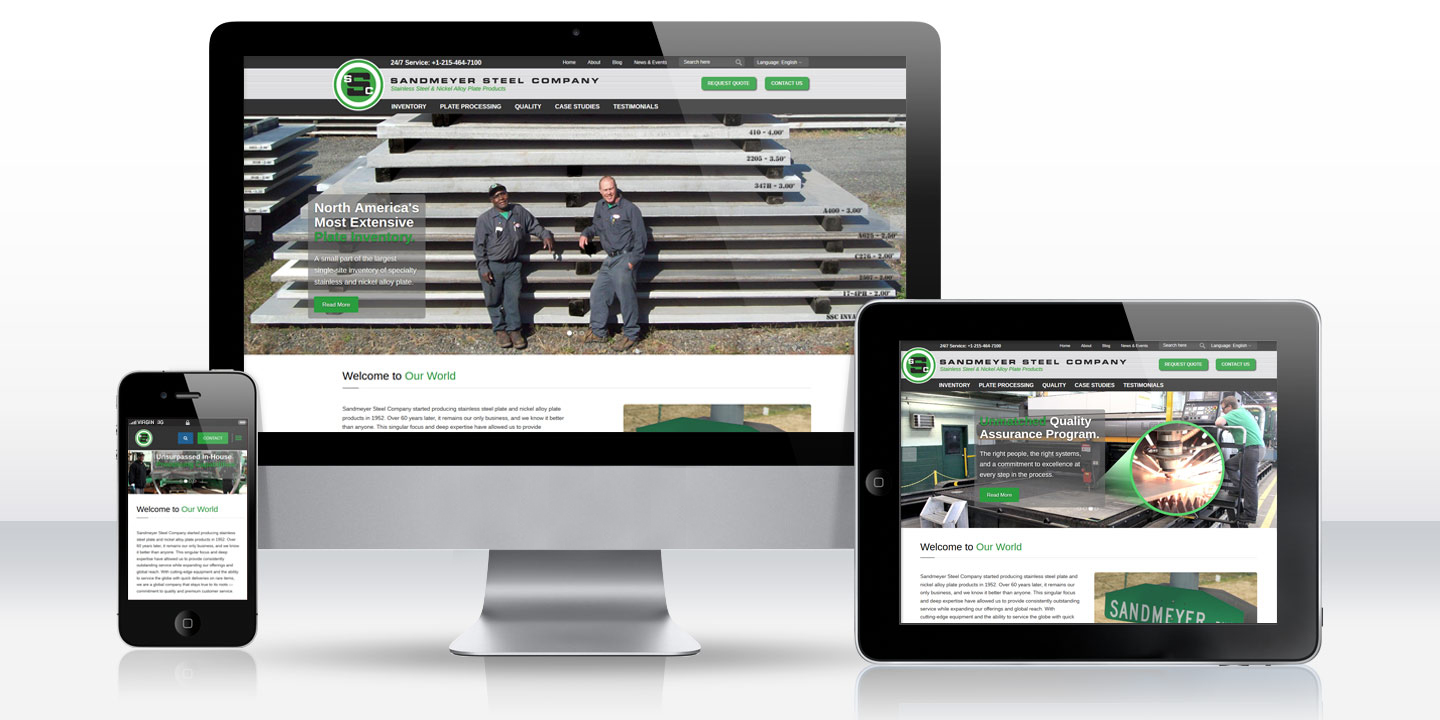 Sandmeyer Steel has had a long working partnership with DDA, having first developed their website in 2005 and subsequently embarking upon aggressive post-launch search engine optimization efforts centered on the development of keyword-rich copywriting post launch which considerably improved the website's rankings on the major search engines. While the website was still driving leads for the company, Google's changing standards combined with advances in technology meant that it was time for the company to do an overhaul of the over-ten-year-old design. Sandmeyer reached out to DDA, seeking out a new responsive website that would maintain compatibility across all devices, browsers, and screen sizes, all while being interactive, visually engaging, and easy to use.

DDA determined during discussions with the client that the new responsive website would not only need to be cross-platform compatible, but would need to feature engaging and original graphic designs that would make the company stand out boldly among its competition as a leader in the stainless steel processing industry. A rotating series of banner images with key marketing messages helps summarize the company and what it is about in a succinct and appealing manner.  Through conversations with the client, it was determined that the integration of video captured from two new cameras it recently acquired would help capture and hold attention of viewers.  The aerial drone and 360-degree videos would be the perfect visual summary to represent a state-of-the-art company that consistently leads within its industry.

DDA's professional graphic designers developed a homepage presentation featuring bold imagery and text summarizing the company's capabilities and history. The site includes a parallax design with a 2.5D effect, with images moving behind in the background at a different speed than the rest of the site to give a sense of depth to the user. Taglines distributed throughout explain how the company succeeds, through stocking, producing, and delivering products accurately and efficiently. The responsive design allows the website to be viewed on virtually any device, browser, or screen size, and is as easy to navigate via touch screen as with mouse for genuine cross-platform compatibility between desktops and laptops and tablets and smartphones.  Depending on the device used, the layout and spacing of menus, texts, and tables all adjust for the ideal presentation.

The Content Management System (CMS) which allowed Sandmeyer Steel to maintain its own blog was extended to the News and Events section for even greater control. Likewise, the Request a Quote form, featuring multiple drop-down options from which a user could choose to specify a product, was ported over from the previous site, with the user interface adjusted to accommodate the new responsive website design. DDA shot all the aerial drone and 360-degree video featured on the website's homepage during an on-site filming of their inventory and processing equipment during the course of the project. The aerial drone footage was edited down to a shorter loop featuring varying speeds designed to capture the attention while also focusing the viewer on either the extensive nature of their inventory, or their exceptional stainless steel processing capabilities. Four interactive 360-degree videos were placed on the page devoted to its processing capabilities, offering a slice-of-life view of a typical day in a Sandmeyer Steel manufacturing plant. These innovative videos allow users to shift perspective around one central rotation point to make for a truly immersive experience that makes the company stand apart.

The innovative new responsive website builds off a long legacy of continuous DDA SEO efforts while updating the graphic design and adding cutting-edge video for exceptional user appeal.  Launched in the beginning of 2016, the website was well received by the client and is sure to serve the company well as its online presentation for years to come.